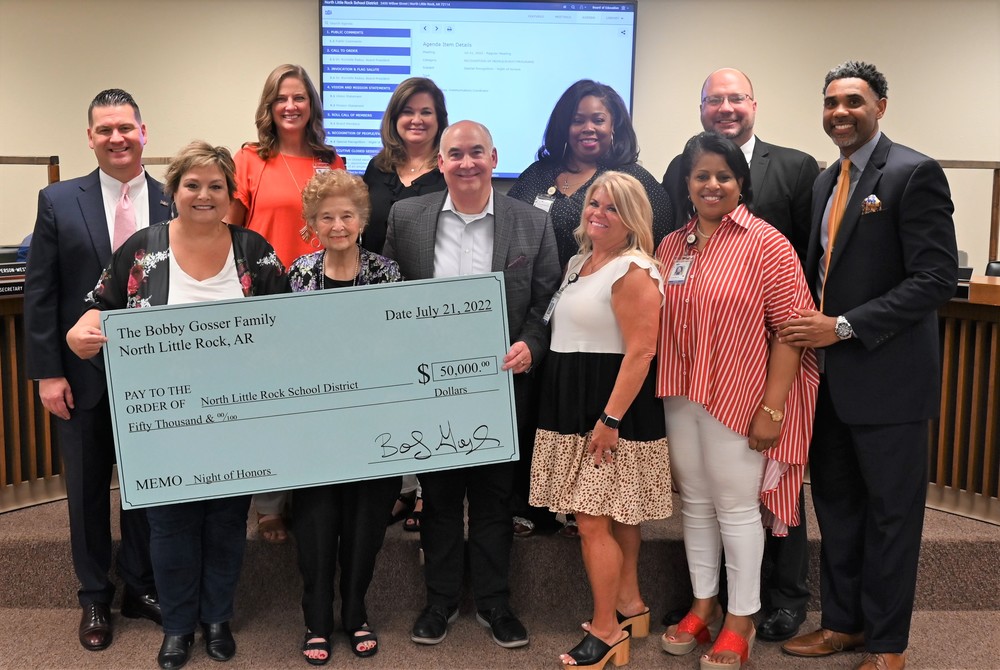 In an effort to honor his mother, wife, and two sisters, Bobby Gosser, a former member of the North Little Rock Board of Education, community leader, and 1979 graduate of Ole Main High School, presented the North Little Rock School District with a commitment to contribute $50,000 over a 10 year period to the Night of Honors event, the district’s annual signature event to recognize teachers and classified employees of the year.  The money will support the event, and the Teacher of the Year will be given a cash award from the Bobby Gosser Family.

Gosser made the surprise pledge at Thursday’s Regular Board Meeting.

Marianne Gosser, Bobby’s mother, served on the North Little Rock Board of Education from
1975 and 1985.  She led the Board two terms as President.  During Gosser’s tenure, a judge
ordered the three school districts in Pulaski County to consolidate.  However, after much opposition, the district resolved to consolidate Northeast High School and Ole Main High
School into one school and voted to have zones throughout the district so that each zone would have a seat on the Board.  In addition, the district set up volunteer doctors to perform annual physicals for student-athletes, of course recruiting her husband, the late Dr. Bob Gosser.

Jenny Gosser Turner, Bobby’s sister, served as a Kindergarten Teacher at Amboy Elementary from 1985 through 1988.  Ashley Ingalls, a former colleague, said Jenny was a favorite to students, staff, and students.  “She had a way of getting on the young student’s level and communicating to them and achieved great results. She was fun, energetic and always gave 110%.”

Even after Jenny’s stint as a teacher, she stayed involved as a volunteer for many school activities and support groups, all while her daughter, Laura Leigh Turner, went through the district and graduated from NLRHS in 2015. From PTSA, Teacher Appreciation luncheons, fall carnivals, Theatre Arts Department, and Post Prom, all were important for Jenny.

Leigh Anna Gosser Askins, Bobby’s sister, is the Secondary Special Education Coordinator in the Special Services Department for the North Little Rock School District. She has been in this role since 2018.  She has also been a resource and inclusion teacher at the North Little Rock Middle School and a special education due process designee.  Before teaching Leigh Anna was a supportive parent and volunteer with PTSA and baseball, among other things, while her two children were in school, J.J. Askins, Class of 2016 and Jessica Askins, both products of the NLRSD.

Dr. LeAnn Stoll, Leigh Anna’s supervisor, said in part: “Leigh Anna is an integral part of the Special Services Department. She has the true belief that ALL students can learn and provides invaluable support to the secondary campuses. Her understanding of special education laws and regulations is outstanding and compliance is a priority. Leigh Anna’s positive attitude and willingness to help others grow is one of Leigh Anna’s many talents.   She has a beautiful 20-year-old daughter Jessica with Down’s Syndrome, which gives Leigh Anna the ability to relate to the parents of our special needs students in such a positive way.”

Donna Gosser, Bobby’s wife, served as the NLRHS Choir Director from 2010 to 2017. Donna had 3 children go through the NLRSD – Trey Gosser, Class of 2009; Alex Gosser, Class of 2013; McKenzie Gosser Savage, Class of 2015. Just one year into her tenure, Donna founded and created the NLRHS Show Choir. Donna single-handedly recruited students from all backgrounds and with varying interests to participate in the class. She had the most diverse group of any classroom. Show Choir was a huge success as evidenced by the waiting list that developed after the first year.

Former NLRHS Principal, Tracy Allen, said this about Donna:  “What made Donna Gosser a gifted educator was her heart for kids. The best teachers know how to form relationships with their students and get to know them on a personal level by knowing where they work, their siblings and family structures, their interests, etc.”

Former student Briley Brazear said the following:  “Mrs. Gosser made it fun! We all loved coming to her class. She was so much more than just a choir teacher. We all knew that she really cared about what was going on in our lives.”

Former student Kennedy West said: “Mrs. Gosser told me that I should never be afraid to use my God-given gifts. She was always pushing us and building our confidence. I remember when she asked me to be Vice President of the Show Choir. I would have never done that without her believing in me and pushing me. Mrs. Gosser’s Show Choir class was my favorite time of
day where I made many friends and lifelong bonds.”

The Night of Honors takes place each spring.