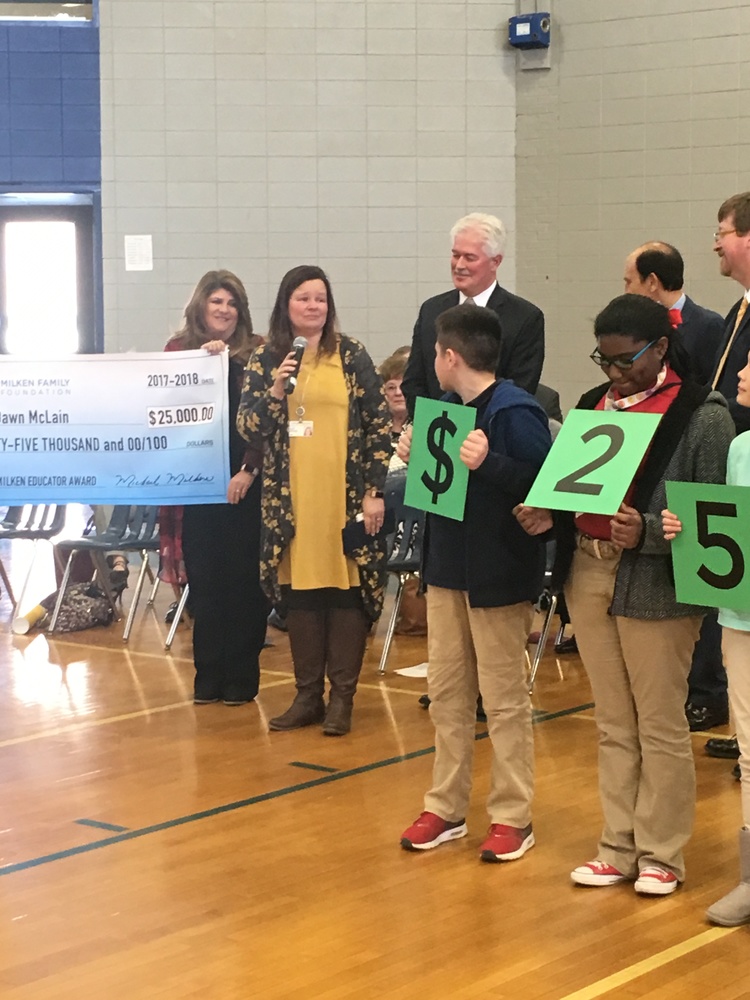 SANTA MONICA, Calif., (January 25, 2018)—Putting the fun in fundamentals, Arkansas teacher Dawn McLain engages her 6th grade science and math students any way she can, whether it be with robotics, design modeling or rocketry. And while big science may be helping lift her students' test scores into the stratosphere, her classes are invariably down-to-earth and feature hands-on learning no matter how abstract or elevated the material gets.

Yet it was McLain who was soaring today after a surprise school assembly where she was presented with a Milken Educator Award by Arkansas Department of Education Commissioner Johnny Key and Milken Family Foundation Co-Founder Mike Milken. A fired-up McLain was named a 2017-18 recipient of the national recognition, which comes with an unrestricted $25,000 cash prize. She is the only Milken Educator Award winner from Arkansas this year, and is among the 44 honorees for 2017-18.

The Milken Educator Awards, hailed by Teacher magazine as the “Oscars of Teaching” has been opening minds and shaping futures for 30 years. Research shows teacher quality is the driving in-school factor behind student growth and achievement. The initiative not only aims to reward great teachers, but to celebrate, elevate and activate those innovators in the classroom who are guiding America’s next generation of leaders. Milken Educators believe, “The future belongs to the educated.”

A lead teacher for her school district, McLain splits her time between the classroom and mentoring students and less-experienced teachers. She is a strong proponent of project-based learning, technology integration and savvy data deployment. While thinking outside the box inside the classroom, she is also actively engaged in student life and community work such as food drives and the Boy Scouts, which are part and parcel of her emphasis on a fully rounded education for learners and teachers alike that's chock-full of real-life experience.

"Great teachers like Dawn McLain prove every day that education is the best investment America can make," said Milken.

“Ms. McLain embodies the qualities of a student-focused educator. She inspires those around her to learn, grow, take risks, and develop a students-first mentality,” said Key. “Her role as a teacher leader and the impact she has made on student achievement through that role sets a strong example for other districts wanting to empower their teacher leaders. I am extremely proud of Ms. McLain and thankful to the Milken Family Foundation for supporting such a deserving educator here in Arkansas.”

Dawn McLain believes in educating the whole child. The sixth-grade science and math teacher wants her students at Arkansas’ North Little Rock Middle School to succeed academically, of course, but she’s equally focused on helping them build life skills that will help them succeed into adulthood. McLain encourages hands-on learning, including robotics, design modeling and interactive activities like tug-of-war. After attending the Honeywell Educators Space Academy program, McLain brought back information, projects and curriculum available to all teachers at the school. Her hands-on approach has boosted North Little Rock’s science scores by 7% and has helped students at all levels find success. Under McLain’s guidance, one special education student who had been struggling designed a special door that ended up hanging on a nearby farmhouse; the student is now flourishing after seeing his project come to life.

McLain has chaired both the math and science departments at North Little Rock. As one of several lead teachers in the district, McLain spends half her day in the classroom and the other half mentoring students, novice teachers and educators-in-training. She delivers professional development, demonstrates lessons and often co-teaches with her colleagues. Because McLain has worked with all ages and holds a master’s in gifted and talented education, fellow teachers and administrators seek out her counsel.

A member of the school leadership and Arkansas Leadership Academy teams, McLain is North Little Rock’s resident expert in areas like project-based learning, technology resources, and Summit Learning. When the school adopted Opportunity Culture, a program designed to support success for both teachers and students, McLain took a lead role, designing lessons, helping with data collection and analysis, and facilitating daily team meetings. For Project Lead the Way, a student empowerment program, McLain trained staff, organized supplies and made sure colleagues knew how to incorporate the projects into their classrooms.

McLain builds strong relationships with both parents and students. Many keep in touch with her to share their successes and make sure she knows they are building on the skills she taught them. She advises the student council, has organized coat drives and canned food collections for students in need, and volunteers with Boy Scouts of America.

More information about McLain, plus links to photos and a video from today’s assembly, can be found on the Milken Educator Awards website at http://www.milkeneducatorawards.org/educators/view/Dawn-McLain.

Milken Educators are selected in early to mid-career for what they have achieved and for the promise of what they will accomplish. In addition to the $25,000 prize and public recognition, McLain’s honor includes membership in the National Milken Educator Network, a group of more than 2,700 top teachers, principals and specialists dedicated to strengthening education.

In addition to participation in the Milken Educator Network, 2017-18 recipients will attend a Milken Educator Forum in Washington, D.C., March 20-23, 2018. Educators will have the opportunity to network with their new colleagues and hear from state and federal officials about maximizing their leadership roles to advance educator effectiveness.

More than $138 million in funding, including $68 million in individual $25,000 awards, has been devoted to the overall Awards initiative, which includes powerful professional learning opportunities throughout recipients’ careers. Many have gone on to earn advanced degrees and be placed in prominent posts and on state and national education committees.

The Awards alternate yearly between elementary and secondary educators. Unlike most teacher recognition programs, the Milken Educator Award is completely unique: Educators cannot apply for this recognition and do not even know they are under consideration. Candidates are sourced through a confidential selection process and then are reviewed by blue ribbon panels appointed by state departments of education. Those most exceptional are recommended for the Award, with final approval by the Milken Family Foundation.

Past recipients have used their Awards to fund their children’s education or their own continuing education. Others have financed dream field trips, established scholarships and even funded the adoption of children.

For more information about the Milken Educator Awards, visit www.MilkenEducatorAwards.org or call MFF at (310) 570-4772.

About the Milken Educator Awards

The very first Milken Educator Awards were presented by the Milken Family Foundation 30 years ago in 1987. The Awards provide public recognition and individual financial rewards of $25,000 to elementary and secondary school teachers, principals and specialists from around the country who are furthering excellence in education. Recipients are heralded in early to mid-career for what they have achieved and for the promise of what they will accomplish.